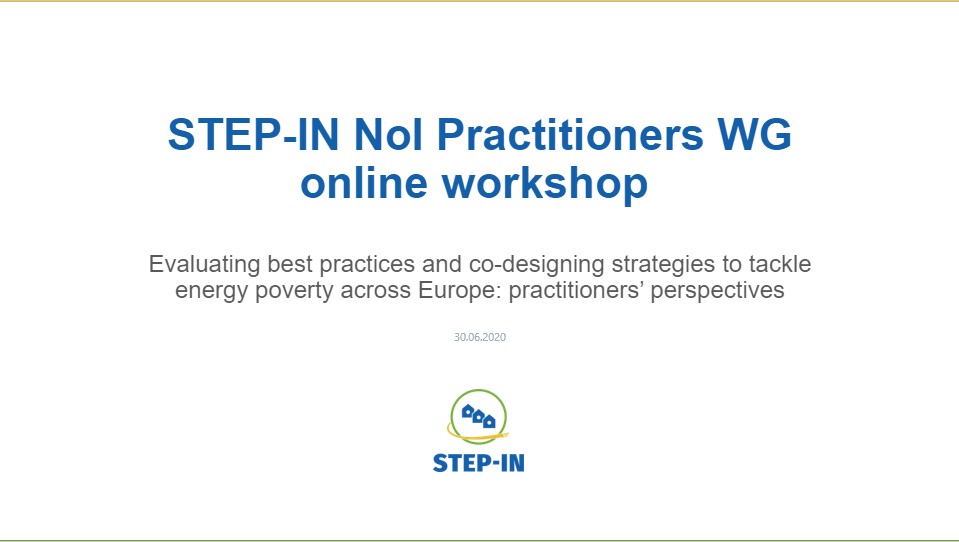 STEP-IN has successfully carried out its Network of Interest Workshop on 30th June 2020 as a virtual meeting, where 22 stakeholders attended, mainly from practitioner organisations. This first part of the second phase of the STEP-IN Network of Interest engagement focused on existing best practices to tackle energy poverty across Europe.

Slavica Robić of DOOR – Society for Sustainable Development Design showcased the initiative’s work to tackle energy poverty in Croatia, highlighting the successful implementation and testing of low-cost energy efficiency solutions and gathering actual field data for evidence-based advocacy. Ms Robić further pointed out the good experiences made through field work done by volunteers and/or students and the involvement of local communities. A further crucial factor in DOOR’s work is cross-sector collaboration and media involvement, increasing the likelihood of the adoption of proposed measures.Ms Robić appreciated the exchange with STEP-IN and the other initiatives,

“The workshop offered interesting and valuable insights into perspectives and challenges of energy poverty practitioners working in different contexts.”

Stefan Goemaere of Samenlevingsopbouw West-Vlaanderen presented the Papillon Project which provides a household appliance rental model for low income households that do not have the funds to purchase high efficiency appliances. The project successfully creates new forms of engagement between business & social partner / business and low-income households and could be scaled up significantly over the past years. As conclusive words, Stefan Goemaere stated,

“This STEP-IN workshop for practitioners showed the importance of local context-based actions that reach out to the people in energy poverty themselves, actions that make them actors and not subject of energy policies.”

Mònica Guiteras Blaya of the Alliance against energy poverty, Catalonia (APE) provided a comprehensive overview of the alliance’s initiatives, actors and objectives. APE, an alliance between energy poverty-affected people has brought energy poverty to the fore of the public debate since 2014, by asking for recognition of access to basic energy and water supplies as a fundamental human right. APE has developed into a mutual empowerment network, as well a channel for political education and change. According to Ms Guiteras,

“APE’s case is an opportunity to assess the diverse ways in which communities connect with energy needs and uses, and to foster engagement of policy and stakeholder initiatives with successful progress originated from civil initiatives, and putting affected people on the center, not the margins.”

Following the presentations, the participants fruitfully discussed on how scalable and replicable the presented results are, according to the needs and constraints observed during the implementation of the STEP-IN living labs and considering the different geographical contexts. Stefan Bouzarovski concluded the workshop saying,

“The STEP-IN network of interest workshop with energy poverty practitioners was a really useful learning experience, and I hope that was also true for the many other participants from across Europe. The follow-up discussion showed that despite the very different ways of working with people who face domestic energy difficulties, there is much good practice that can be shared and developed across Europe. Moreover, practitioners working in the field have developed a distinctive and strong ethos around the most effective forms of support, which is now further reinforced by new legislation at the European level.”

The STEP-IN team wishes to reiterate their gratitude to the speakers and the participants, and we look forward to other upcoming workshops with the different stakeholders. Stay tuned for some video clips of this workshop to come, here on our website as well as on our social media accounts!